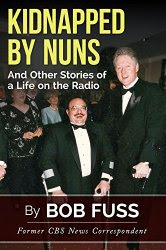 Now retired, for 40 years Bob Fuss was a news correspondent for a series of national radio networks.

“He covered Congress for 23 years and traveled with half a dozen presidential campaigns.

He loves to travel and for work and pleasure has visited all 50 states and more than 70 other countries.

He was honored in 2015 with the Career Achievement Award for distinguished reporting on Congress from the Radio and Television Correspondents Association in Washington DC.”

“Taking readers on a journey over the last four decades of news from Hollywood to Washington and around the world from Andorra to Zimbabwe. Ride the campaign plane with Ronald Reagan, get the inside story of why Congress is such a disaster and share adventure travel stories from a globetrotting correspondent. Retired CBS News Correspondent Bob Fuss has traveled with half a dozen Presidents, covered Congress for more than 20 years and includes travelogues from his adventures around the world.

One unique aspect of his story is that while millions of radio listeners heard his reports every day, none knew he was disabled and has always walked on crutches.”

On the radio, no one knows you're disabled. Born with “a whole range of birth defects,” Bob Foss was never able to walk without crutches. Yet from a young age he showed the talent to figure out how to accomplish his goals, refusing to let his physical challenges hold him back. After a stint at the college station at Stanford, Foss started freelancing for the UPI radio network with one of his first stories being the Patty Hearst kidnapping. He was hired by the network based on that work before they realized he was disabled.

Kidnapped by Nuns and Other Stories of a Life in Radio tells a series of stories from Foss' life, most of which fall into three groups, although some stories could be categorized in multiple groups.

The first kind of story is the “life in radio” part of the title. These focus on his duties and assignments as they changed over time, starting in the San Francisco area and moving back and forth across the country to Dallas, Los Angeles, New York, and DC.

The second kind of story is Foss' take on particular stories he covered. As he explains early in the book, as a journalist he was required to be non-biased in his reporting. Now that he's retired, Foss can express his personal opinion, which he does, letting his thoughts creep in at times. Yet his explanations of stories and discussions of politicians from both major parties still felt non-partisan and balanced. His opinions were both good and bad about the stances of both parties and the people he dealt with, depending on the person and situation. It never felt like he had an ax to grind which made me feel his opinions could be trusted.

The last type of story were about his travels, sometimes for work, but often not. Foss has been to all fifty states and numerous countries, both for work and on his own. I'm a fan of travel stories, but it was this group of stories I found the least entertaining. He chose interesting places to highlight, many that I wasn't familiar with and enjoyed learning about, but for me, something was missing from some of them. What that is, I'm still trying to figure out, but think it might be that they sometimes felt like too much of a recitation of the itinerary and failed to look at the bigger picture of how the experiences helped Foss grow.

An insignificant number of typos.