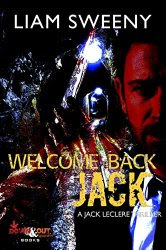 Liam Sweeny was born in Albany and raised in the Capital District, an area steeped in centuries of history in the scenic Hudson Valley. Sweeny has been active in political and humanitarian activities his whole life. In 2005, he began writing after three weeks spent in post-Katrina Louisiana.

His first three books, Anno Luce, Anna’s Book and The Serpent and the Sun were in the sci-fi/fantasy genre. Sweeny subsequently turned to crime and noir. His work has appeared in a variety of crime publications.

When Jack was six years old, his parents were brutally slain by a serial killer. The police later found drifter Clyde Colsen driving a stolen car, his clothes soaked in blood. He was tried, convicted and executed. Jack grew up knowing the police got their man.

Now a decorated homicide detective in New Rhodes, Jack arrives at the third crime scene of the “South End Killer” murders and finds his name. He will soon find out something else: thirty years ago, they got the wrong guy. And now the right guy’s come back to pay Jack and New Rhodes his bloody respects.

As Jack struggles to stay on the case, his cat-and-mouse game with the killer makes him wonder if he’s the cat or the mouse. His family and everyone in his life is fair game. As the killer escalates and threatens the entire city, Jack has a question he must answer in his desperation: can he stop the monster without becoming one?

Well, this is a nugget of a novel. Even at the outset Welcome Back Jack feels a little more than a standard crime thriller. There’s a host of strong characters, each is flawed and with enough history to make them interesting. Jack in particular, with his parents murdered, case closed. But is it?

There’s quite a powerful psychological element to the writing too. Sweeny (and therefore the killer) throws clues out like breadcrumbs. Leading Jack and the reader along an increasingly taut narrative.

The deaths are sufficiently gruesome to make the reader realise we’re dealing with a sick person (which is, I suppose, the definition of a serial killer) but without ever drifting into the realms of gruesome or meaningless gore.

The dialogue has an excellent depth to it. There’s plenty of conflict between the characters and beyond Jack (for example his father in law, also a cop, begins to question whether they caught the right man, the actual killer of Jack’s parents).

In addition the procedural element is believable and clearly well researched, the cops really feel like cops who know what they’re doing.

Sweeny’s admirers include heavyweights in the genre such as Ken Bruen, Les Edgerton and Joe Clifford. On the strength of this novel, it’s easy to see why.

Nothing of note beyond what is typical for crime thrillers.