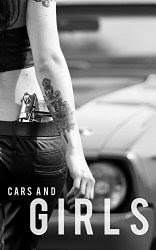 This anthology contains four short works (novelette length on average) by four different authors. All are members of the Pankhearst author's collective.

“Born and raised in Liverpool, where they invented football and popular music, she now lives in Austin, Texas. The black sheep of her family, she comes from a long line of California beauty queens on her mother's side. As she so often says, Northern Scum, Southern Belle.”

“Tyson is best described as a nature lover, wordsmith, music nerd and genius, playgirl philanthropist. Her dream is to move into the mountains where she will perfect her hermit-like tendencies, grow a vegetable garden, bake fruit pies and own a claw foot bathtub.”

For the final two authors all I can find is the one line bios in the book which say that Madeline Harvey “enjoys adverbs” and Zoë Spencer “thinks umlauts are important.”

For more, visit the website for the Pankhearst collective.

“Bad things happen. Everybody dies. But the girl in the red dress kicks against the pricks. Four merciless and compelling stories by emerging writers from Canada, the UK, and USA.

From behind the wheel of her father's lovingly restored Barracuda, a waitress will protect her baby sister at all costs.

A nihilistic junkie whore hell bent on revenge snatches a last-gasp shot at an unlikely redemption. Her father sold her virginity for the price of a custom paint job. Now she's back and she's taking the whole damn car.

An English aristocrat drives across Europe to end a bloody feud before it consumes the next generation.

And two young runaway lovers with a steep price on their heads take a savage road trip through all kinds of crazy.”

Beyond the obvious of a female and a car figuring into the story in some way, each of the four works in this anthology have much in common. They're noir, so if stories with a dark side and an ever increasing body count bother you, this might not be for you. Each is a well-crafted tale and although the main characters are all flawed and possibly not your first choice for a neighbor, they're also easy to root for, as whatever bad things they might do are aimed at someone much worse.

I find it difficult to pick a favorite. If forced, I'd probably give the nod to Evangeline Jennings' story Crown Victoria because her subtle musical references (at least those I caught) were amusing. Your favorite could be different. There isn't a clunker in the bunch.

While what I received was an ARC, it had no significant issues.