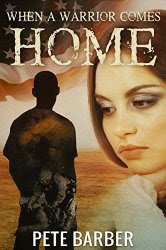 A native of Liverpool, England, who now lives in North Carolina, Pete Barber has two prior novels, NanoStrike and Love Poison. He's also written a few reviews you might have read.

“Sarah Braeman’s Skype connection to Iraq is lost during a video call to her husband, a US Army sergeant. As air raid sirens shriek from her computer’s speakers, her laptop displays an image of Mike’s face, frozen in fear.

Medics repair Mike’s leg injury. But when he returns home, Sarah is thrust into the role of caregiver to a man she hardly recognizes. Tortured by wild mood swings, flashbacks, and anti-social behaviors, her husband becomes a danger to himself and others.

A business opportunity seems to offer a way out for Mike from a military that now considers him weak and surplus to requirements. But can Sarah risk her family’s future on a man who may be damaged beyond repair?”

When a Warrior Comes Home is an intense page-turner. This is true of the war scenes, early in the book, and the intensity continues when the warriors bring the war home with them. It's populated with some great characters that you'll like or, when some of them aren't very likeable, you'll at least sympathize with them.

While there is a lot more to the story, ultimately this book is about the human cost of war. Not the obvious, of lives lost on both sides, but of lives broken and the domino effect in the impact on families and communities. If you've ever been around an ex-soldier who suffers from PTSD, you'll recognize the authenticity of Mr. Barber's portrayal. It would be easy for a book like this to take an overt political stance. (I'm having a hard time not doing that in this review.) It doesn't, instead leaving it to the reader to figure those things out themselves which is as it should be.

Congratulations! Pete Barber on a super 5* review from the premier indie author reviewer, Big Al, himself. When a Warrior come Home deserves the kudo.

Thanks Jackie. I (obviously) agree. It's a good one.

Many thanks for taking the time to read and review, Al. I appreciate it... Pete