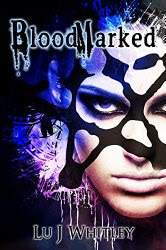 From Lu J. Whitley’s Amazon page: “Once upon a time, in a land far, far away, a girl was born who was just a little strange around the edges. One thing led to another, and now you're reading her stories.

Lu is a full-time writer and self-professed oddball who lives a quiet life in the mid-Midwest with her geeky, roboticist husband and four-legged children.” BloodMarked looks to be her debut novel.

“Her nightmares are real, and they're out for blood. Greta Brandt's life is run of the mill, except for the nightmares - violent dreams of creatures that wear the skin of the people around her... and him, the man with the golden hair and incandescent red eyes.

After 800 cursed years, Jaromir Ragnarsson has finally found the violet-eyed woman with the star-shaped birthmark of the BloodMarked: Greta Brandt. But he's not the only one who's been searching for her.

When terror strikes close to home, Greta must finally accept her role in a world she thought only existed in her fevered dreams, putting her wavering trust in the one man who knows the full truth about her fate.”

What a thrill-ride, Greta Brandt is a twenty-three year old college student living at home with her German immigrant mother. Her father died eighteen years ago when she was only five years old. She suffers nightmares about that night repeatedly. Now, the Takers (Bortbytingen) have found her again and they won’t stop until they have her.

Jaromir Ragnarsson has been assigned by The Fraktioneers (a highly secret organization) to protect her at all costs. When Jaromir is trying to tell Greta how to pronounce his name, since it was such a mouthful (insert sexual innuendo here) he told her she could call him Jami for short. (He pronounced it with a Norwegian accent.) Greta chuckled and said “your mom called you yummy?” “Jami,” he repeated. “Yaa-Mee. Not yummy.” So in my head and Greta’s, Jaromir, our giant Norwegian savoir is Yummy all the way through the story. How could he not be? Tall, long blond hair ice-blue eyes, muscular… Yeah, he was yummy.

The action is a fast paced, rollercoaster ride with twists and turns that are completely unexpected. The storyline is unique and original. Ms. Whitley redefines vampires, trolls and skin-walkers to some degree. However, her urban fantasy world is much like our own, which lends to ease of believability. I can highly recommend this urban fantasy, which ends in a tense and precarious situation. I look forward to the sequel.

This is Book 1 of The Fraktioneers Series.

I found no significant editing errors.

Thanks so much for the kind words! Glad you liked it, and I really appreciate the review!

You're welcome and thank you for dropping in and commenting, Ms. Whitley. I am looking forward to more of Yummy, Greta, and now Gus also. :D

Great Review. I love the book! And I am not a fan of Urban Fantasy. but! it grabbed my attention. Done.

Thank you, Ms. Weger, for dropping in and commenting. I hope you enjoy the book as much as I did. :D