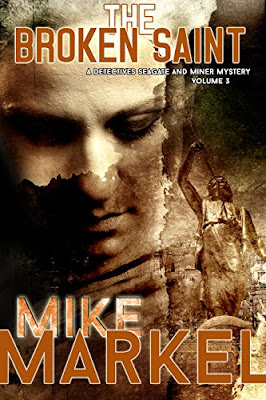 “Seagate and Miner investigate the murder of Maricel Salizar, a young Filipino exchange student at Central Montana State. The most obvious suspect is the boyfriend, who happens to have gang connections. And then there’s Amber, a fellow student who’s obviously incensed at Maricel for a sexual indiscretion involving Amber’s boyfriend. But the evidence keeps leading Seagate and Miner back to the professor, an LDS bishop who hosted her in his dysfunctional home. Seagate takes it in stride that the professor can’t seem to tell the truth about his relationship with the victim, but her devout partner, Ryan Miner, believes that a high-ranking fellow Mormon who violates a sacred trust deserves special punishment.”

Mike Markel teaches writing at Boise State University. In addition to the Seagate and Miner Mystery series (this is the fourth in that series) he has written eight non-fiction books on writing and numerous articles for various publications.

I’d previously read Three-Way, another of the books in the Seagate and Miner mystery series. One of the things that appealed to me was the relationship between the two detectives, with Karen Seagate as the crude-talking, cynical, recovering alcoholic and Ryan Miner as the devout Mormon family man who describes himself as “a bit of a boy scout.” They’re just about polar opposites, despite this, they have mutual respect, yet the dynamic between the two and their different styles, as ripe as it is for a lot of tense moments, rarely works out that way. Instead they tend to complement each other, with their differences and contrasting points of view making the partnership stronger.

In this installment, Ryan’s religion comes into play, at points blinding him to possible scenarios and later, when he’s not able to ignore new information they’ve uncovered, causing him to focus too much on a single suspect, to his detriment.  There’s a lesson to be learned about how our preconceptions can influence our approach to problems in a bad way. Another excellent read from Markel that keeps you guessing whodunit the whole way.

Added for Reprise Review: The Broken Saint was a nominee in the Mystery category for B&P 2015 Readers' Choice Awards. Original review ran November 1, 2014