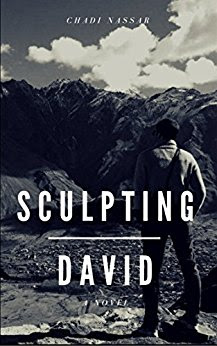 “David, a trust fund baby, has gone through the biggest heartbreak of his life. He is successful, spontaneous, and generally liked, yet he cannot hold onto his one true love. Trodding down a street one day, David is bumped on the shoulder. When he turns around, the individual is staring at him with the crispest blue eyes he had ever seen. Jolted from his broken heart and thrown into a world of love so different from what he has known, David ventures on a journey of self-discovery taking him across the world and through all realms of emotions.”

Chadi Nassar: “Chadi’s vivid imagination originated during family road trips every weekend. Anything could get his mind running, from a garbage bag swaying in the wind to the person crossing the road. Growing up as an expat in the UAE he is considered a Third Culture Kid. His adventures as a child and his ability to create a story out of any object has fueled his passion for writing. Sculpting David is his debut novel which is only the start of Chadi’s budding career.”

This story starts with David going through a deep depression after his girlfriend leaves him. The story is divided into three segments, each told from first-person points-of-view from David and two other main characters in David’s journey. The first segment, and the Epilogue is from David’s POV. The reader easily feels his pain and desperation. The emotional turmoil is raw and he has separated himself from everything trying to gain the strength to pull his life back together. There is a lot of repetition in this segment of the book meant to immerse the reader into David’s state of mind, and it works. However, where it doesn’t work as well is later in the story when a lot of this is repeated as he recalls his pain. Perhaps since this book was first released in three episodes the author felt the necessity for the repetition. However, with the episodes combined in this book, it’s unnecessary.

David is a unique and interesting character with several positive attributes. I enjoyed getting to know him. When David is thrown a curve ball that throws him off balance, he has to come to terms with his sexuality. At the beginning of his story he truly believed that Helen was the love of his life, and when she left he was devastated. Now, he has to reevaluate his whole life, which leads to consequences he wasn’t expecting for himself or from his family.

Time, as it often does, brings deep losses and healing. As David is settling into his new situation another curve ball is thrown and his life is turned upside down again. I did notice one character description inconsistency in this area that is integral to the story. I don’t feel like I can explain further without a spoiler, so I am going to leave it at that.

I do feel like this book is worth investing in another round of editing to clean up issues. The story is worth it.  Sculpting David is an enlightening read, full of diverse, well-developed characters, globetrotting fun, and an emotional roller-coaster ride that will leave you contemplating life.

Sculpting David is the full version, containing three Episodes - that are available independently, of The David Saga. Mr. Nassar uses British spelling.
There are a few F-bombs. Sexuality is handled gently and tastefully.

Several small proofing issues such a missing or extra words and the character inconsistency I mentioned in the review. I also found a few formatting issues that concerned font size irregularity, this did not distract me during reading.