Review: Days of the Dead by Felicia Lee 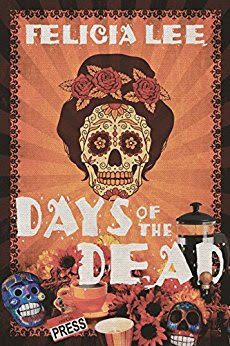 “When is it terrifying NOT to see a ghost? Los Angeles Alternative reporter and political activist Elena Guzman knows. She sees dead people – all the women in her close-knit Mexican-American family do. They only stop seeing the dead shortly before they die themselves. And right now, Elena’s failing to see a ghost that seemingly everyone else is seeing — the mysterious wraith seen abducting Graciela Hernandez, a young immigrant housekeeper.

But Elena has plenty to distract her from her possibly impending death. Her loyal but unstable best friend Mona is growing dangerously obsessed with her abusive ex-boyfriend. Graciela is still missing, and Elena is determined to find her and return her to safety, even if the police aren’t.

This means doing exactly what she fears most: tracking down a ghost she can’t see. But Elena must power through her dread to find Graciela before it’s too late…for both of them.”

Felicia Lee: “Many members of my family have seen ghosts, but I haven't, and am not sure I want to...so instead I write about them. When I'm not writing about ghosts, I'm writing non-creepy web and promotional copy for businesses, nonprofits, and public agencies or writing non-fiction essays (some of which have appeared in the Los Angeles Times and Salon.com).

I'm also a near-native of Los Angeles, the setting of the Days of the Dead series. I arrived there from my birthplace in the mysterious east (Pittsburgh, Pennsylvania) at the age of the 3 and earned two degrees in English from Stanford and a doctorate in linguistics from UCLA. After 10 years as a university professor and researcher (and writing unintentionally terrifying things like my first book, Remnant Movement and VSO Clausal Architecture: A Case Study of San Lucas Quiavini Zapotec), I returned to my roots as a writer. I've never looked back.”

Days of the Dead is what I consider a cozy mystery and I have to admit, I love the book cover. I found the premise unique, the characters well developed, and diverse. Elena Guzman is a strong Latina heroine with high moral character out to make her small corner of the world safer with her journalistic integrity and her supernatural investigative skills.

When an undocumented seventeen year-old Mexican housekeeper disappears from an older upscale neighborhood of Windsor Square, the police are eager to dismiss Graciela Hernandez as a runaway and be done with it. However, Elena is determined to find the truth and save Graciela if she can. When Betty Markman, a busy-body neighbor, warns Elena to stay away from the Parks’ house where Graciela disappeared, because it is a dangerous place for young girls and it’s haunted, Elena’s curiosity is piqued.

I do have one bone to pick though. I would like to suggest to Ms. Lee to not use the same name for different characters in her stories. The first Edward is the art director and layout guy for the Alternative newspaper where Elena works. Later in the book another Edward, an Edward St. John, is introduced. He was a known criminal from the past and referred to using his full name or Big Ed. While that was easy for my old brain to sort out, there was yet a third Edward introduced toward the end of the story. Edward III, that’s what I am going to call him, is nosy neighbor Betty’s adult nephew. I found so many Edwards distracting and Edward III actually threw me out of the story.

The plot is well paced for a novella and the history around Windsor Square community is intriguing and adds to the depth of the story. I found this an enjoyable read and now that I’ve addressed the Edward dilemma readers shouldn’t get as confused as I did. However, it was a grievous enough error I had to deduct a star.

I would also like to end this review saying, I think Days of the Dead will make an interesting series to follow. So, if you enjoy cozy mysteries with a touch of the supernatural, you may enjoy this series beginning.

Days of the Dead looks to be the first book of a series and the debut novella  from Felicia Lee.

Aside from the three Edwards problem, I found a couple of small proofing issues.