Review: Being Travis by Melissa Bowersock 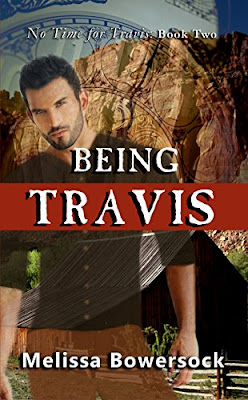 “Two years ago, a weird trick of time sent Travis Merrill spiraling from 2016 to the year 1877. Committed now to his life in frontier Arizona, Travis is married with a child on the way and is homesteading a ranch. His knowledge of the future, however, keeps him at odds with his neighbors, his friends… and his wife. He finds it more and more difficult to protect his home without alienating his family, yet he can’t ignore what he knows is – and will be – true.”

“Melissa Bowersock is an eclectic, award-winning author who writes in a variety of genres: action/adventure, paranormal, biography, fantasy, romance, spiritual and satire. She has been both traditionally and independently published, and is a regular contributor to the superblog Indies Unlimited. For more information, visit her website.”

In the first book of this series, Finding Travis, the main character (in case you haven't guessed, a man named Travis), is transported back in time. In the first book he was adapting to his new environment, trying not to raise too many red flags, and wondering how, when, or whether he could get back to modern times. But then he fell in love and you know how that can mess with plans.

Being Travis picks up a couple years later. Travis is married, moving a few miles away from the army camp where he landed in the first book to settle down with his pregnant wife.

I typically find books and stories with a time travel element to be interesting thought experiments. When the person has gone Back to the Future it introduces some interesting things to consider. How does the person deal with advancements in knowledge that they're privy to, but the rest of their cohorts aren't? What things can they do safely without changing the future in some way that they'll regret? This book has some of that, as well as plenty of tense moments, balanced out by some feel good moments, and even a run in with a historical figure. It was a fun and entertaining read as well as provoking a bit of thought. I'm looking forward to the next series installment.

Although the second in a series and a situation where I think this story would be more enjoyable if a person has read the series opener, those who choose to read this as a standalone should be able to follow the story reasonably well.