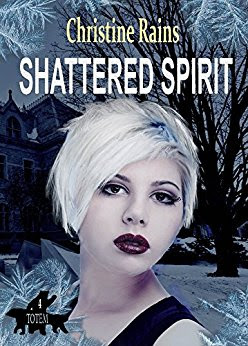 “A haunted house isn’t going to stop Ametta Dorn from doing her job.

Frustrated that her family has left her out of the search for the missing totem tokens, Ametta Dorn loses herself in her work. She’s offered a dream job of a complete interior renovation of a famous Cremaschi house. Not even discovering the house belongs to Lucky Osberg can dampen her enthusiasm.

Lucky’s plan to spend more time with her as she works goes awry when the spirit who protects his home tries to murder her. Ametta won’t be scared off, despite being tempted to run and never come back. She was going to flee Alaska and pursue her designer dreams anyway, yet that means giving up on Lucky and the totem that is just within her grasp.”

Ametta Dorn, the youngest of the Dorn sisters, frustrates the hell out of me. Is it a common trait for the youngest sibling to be so self-absorbed and single minded? At the age of twenty-five Ametta has secured herself as an up and coming interior designer to keep an eye on. Despite being a polar bear shifter, she is intent on opening her own business in the lower 48 or perhaps even Europe. When she decides her family doesn’t need or want her help in recovering the totem tokens that will save all shifters, she moves her timeclock up for her move out of Alaska. Her attraction to Lucky is distracting her from her goal.

Lucky Osberg, a handsome Kodiak shifter who has his eye on Ametta, has the patience of a saint and a plan. He hires her to do a renovation on his house, which happens to be a famous Cremaschi house. This is a dream come true for Ametta, and here she thought Lucky was only a volunteer firefighter. She hasn’t taken the time to get to know him through his pursuit because he has no desire to leave Alaska and that doesn’t fit her dream for her future. Her short-sightedness also bites her in the butt when she discovers that she isn’t even aware of the totems that make up the totem pole, which scattered its tokens all over Alaska to protect itself. See why she frustrated me? Ametta is my least favorite sister. However, I love Lucky.

The addition of Lucky’s house being haunted was an interesting twist. Through the years the spirit has always been a protective entity and its change of character puzzles and disheartens Lucky. The spirit’s aggression is centered on Ametta, which forces her to take a hard look at herself. Lucky tries to protect her, but much of his effort is thwarted by the contentious spirit.

An additional bonus was Ametta’s two phone conversations with Saskia and then later with both Saskia and Sedge. So we gained another peek into their relationship, which I enjoyed immensely.

Shattered Spirit is Ametta’s journey to self-realization and she has redeemed herself, somewhat, in my view. This addition to the series is enthralling and I was able to read it in one evening, because I didn’t want to put it down.

Contains adult language with several F-bombs. Shattered Spirit is the fourth book in the Totem series. This series of novellas build on each other and should be read in order.

I came across no proofing or editing issues.