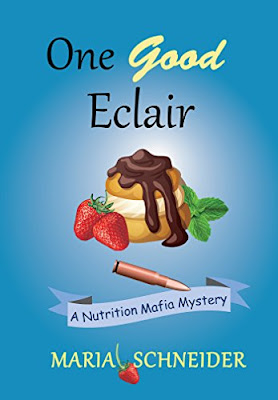 “Ivy is determined to make her living as a nutritionist, but her family has other plans. When that family is the mafia, and one of them has gone missing, all other jobs are summarily pushed aside. Or else.

Ivy can’t trust anyone outside of the family, but Slate is not only willing to help, he’s the last person to have seen her uncle alive. It only makes sense to keep her eye and gun on Slate while they hunt for clues. Watching him is easy because Slate is more than happy to keep her close, but is he leading her away from her uncle or truly helping?

Ivy can’t cook her way out of this mess, but she has a recipe or two for dealing with disaster—if she can just put the fires out before she gets burned!”

“Maria E. Schneider: A few years ago, I decided I wanted to be a writer. I gathered up my computer, memory cards (because you definitely want to back this stuff up!), and dictionary. It’s a slow journey, one with pitfalls, cliffs, boulders and every now and then a peaceful meadow with a clear brook. Surprisingly, the peaceful meadows aren’t publishing credits, they are just moments where I’m doing what I want to do, where the writing is clicking, where my characters are fascinating and I can’t wait to see what happens next.”

Feel free to check out her website, Bear Mountain Books, for her many other books. Or stalk her on Facebook.

I have read several of Ms. Schneider’s fantasy novels and enjoyed them. I don’t believe I have read any of her cozy mysteries though. Fact is, I haven’t read many mysteries at all. However, I am enjoying the genre.

Ivy is trying to establish herself as a nutritionist. However, she moonlights for her Uncle Tom doing odd jobs when she isn’t working. She is probably the most stable person in her family, but trouble seems to follow her. When her uncle goes missing Ivy is left to figure out if there is a connection between her uncle, a bleeding man trying to pick the lock on her uncle’s patio door, gun shots shattering the same sliding patio door, and a murder down the street all in the same evening.

Ivy isn’t sure she can trust anyone but close family, but she keeps bleeding man at gun point as they escape uncle’s house after the gun shots are fired. She’s suspects bleeding man was the last one to see Uncle Tom before he disappeared and she wants answers. It’s a suspenseful captivating story that involves crooked cops, a loan shark, and a computer genius. Ms. Schneider doesn’t miss a beat weaving the tale as Ivy flounders while trying to connect the dots. There are twists which involve an unscrupulous cousin, a mixed breed terrier, a K-9 German Shepard, marijuana-laden chocolate cake batter, an adorable bloodhound puppy, a cat, and a surprising ally.

One Good Eclair is the first book of Ms. Schneider’s Nutrition Mafia Mystery series. As a bonus there are a couple of Ivy’s recipes at the end of the book.