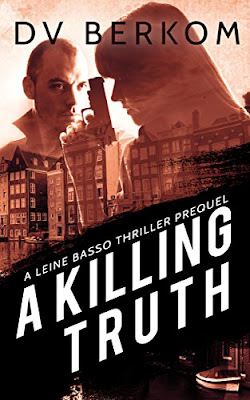 “They say the truth will set you free, but what if it kills you first?
Before serial killers and drug cartels, Leine Basso faced the ultimate betrayal…
Leine eliminates terrorists for a living. After a routine assassination almost gets her killed, she chalks it up to a fluke. Her lover and fellow assassin, Carlos, has another idea altogether. He thinks their boss is setting them up for a fall.
When Carlos goes missing and a bombing thwarts another mission, Leine suspects the stakes are far higher than she could ever imagine, and wonders if the man in charge might have it in for her after all.”

If you've read the books in the Leine Basso series that have come out prior to this, you know a lot about her history. That she worked as an assassin for a quasi-official government agency was always clear. That she no longer did was also clear. And at least to me it seemed that her feelings about her history were ambiguous, with some pride and some regret.

This book is a prequel, coming before any of the main series. It takes place near the end of Leine's time as an assassin. It works as a standalone thriller, with an intense, edge-of-your-seat story. However, those who “know” Leine from the main series will come to understand her that much better after reading A Killing Truth. And while I may be reading more into it than was intended, I think the way this book ended there may be another prequel in the future. Maybe more than one.

Since this is a prequel to the series there is no reason someone would have to have read the rest of the series to enjoy the story.

Thank you BigAl! And you nailed it :-)