Review: Beauty of the Fall by Rich Marcello 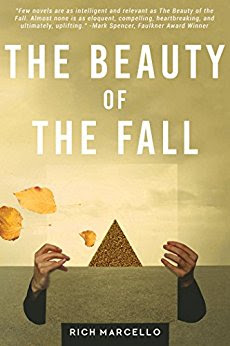 “Dan Underlight, a divorced, workaholic technology executive, suffers lingering grief over the death of his ten-year-old son, Zack. When Dan's longtime friend and boss fires Dan from RadioRadio, the company that he helped create, he crashes and isolates himself.

Willow, a poet and domestic violence survivor, helps Dan regain his footing. With her support, Dan ventures on a pilgrimage of sorts, visiting Fortune 500 companies to flesh out a software start-up idea. He then recruits three former RadioRadio colleagues and starts Conversationworks, a company he believes will be at the vanguard of social change.

Guided by Dan's leadership, Conversationworks enjoys some early successes, but its existence is soon threatened on multiple fronts. Will Dan survive the ensuing corporate battles and realize the potential of his company? Or will he be defeated by his enemies and consumed by his grief?”

Rich is a poet, a songwriter and musician, a creative writing teacher at Seven Bridges’ Writer Collaborative, and the author of three novels, The Color of Home, The Big Wide Calm, and The Beauty of the Fall. Previously, he enjoyed a successful career as a technology executive, managing several multi-billion dollar businesses for Fortune 500 companies.

I became engaged in this story very quickly. The insights into how personal and working relationships become strained in a start-up company after it goes public were fascinating--I suspect the author’s past work experience was put to good use.
The main character’s “pyramid pilgrimage” worked well as a vehicle to highlight the yin and yang of family responsibilities and business demands.

However, when Dan started his second company, the story bogged down in a series of scenes that seemed to exists more to preach a worldview than to progress the story. Dan’s treatment of Willow seemed out of character to me, as though force-fitted in order to inject tension into a story that had drifted a little too far into the realms of proselytizing.

Mr. Marcello’s writing flowed beautifully throughout. Dan, Dan’s team, Olivia, and Willow were all interesting characters, and the premise of Conversationworks provided an interesting view of the potential problem-solving capabilities of a hi-tech social media platform that wasn’t wholly focused on commercial gain.