Review: Who by Karen A. Wyle 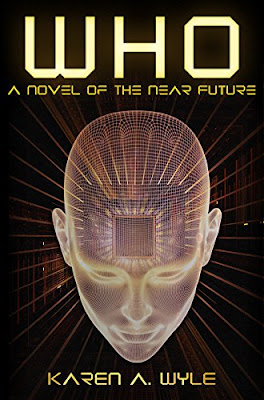 In the near future, 2045 according to the Global Future 2045 International Congress of 2013, humans with adequate means will be able to have their minds uploaded into computers to achieve digital immortality. One computer specialist and musician who does so finds herself in a legal battle to maintain her human identity and free will against corporate greed and an enterprise with a political agenda.

Wyle undertakes an ambitious project to give social context to the seriously considered goal of copying the consciousness of humans into computer hardware.

How will the “stored” interact with the world of the living? What are their legal rights? Do they remain citizens of their homeland? Can they vote?

Wyle answers the last question “yes.” If so, can they be manipulated to support policies they would have opposed when they were alive? Are unrequested “improvements” made by programmers to the stored’s personalities and physical characteristics an attack on free will? Or is elimination of arthritic pain and sagging skin simply a benefit freely provided? How about easing an unsociably nasty temper?

While the story is thought provoking on an intellectual level, there is little emotional or plot tension. Even though the stored heroine and her living husband maintain a loving relationship, including somewhat unfulfilling romantic encounters, it is presented largely through exposition and sterile dialog.

The husband and wife are central players in the first half of the book, but at chapter 13 of the 26 chapter story, they become passive players in their own destiny except for cooperating with their brilliant lawyer. That might mirror reality, but it doesn’t make for a gripping story. Much of the second part is a mockup of court proceedings complete with legal reasoning for assumed complaints, testimony, objections and conferences with the judge. Rulings by an appellate court and the Supreme Court follow. That is all interesting in itself, but it is a tedious advance to the story’s human drama.

If the technology is ever developed, the questions Wyle addresses will have to be considered. “Who” should be required reading for Ray Kurzweil and his fellow futurists--or better yet, a short essay by the very thoughtful Wyle.