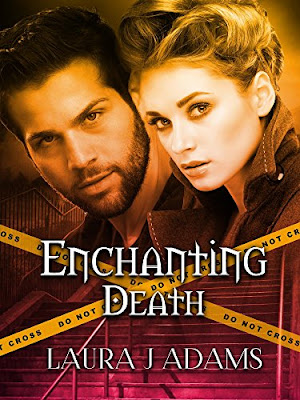 “His first holiday for two years, the only thing Agent Philippe Girard had planned was a relaxing holiday, a wedding and a full moon hunt with old friends.

Sent to oversee local rookie Max Striga as she makes an arrest, his plans soon unravel when the discovery of a body drags him head first into a high stakes murder case.

With demons, enchantments and old enemies, plus an idealistic young partner who simultaneously infuriates him and brings out his protective instincts, Philippe finds himself in a race against time to solve the case before the murderer can strike again.”

Laura J Adams: “Interested in all things fantastical since an early age (I'm sure I spent time in my wardrobe as a child trying to find Narnia) it seemed natural to create my own stories. As I grew and discovered great urban fantasy writers my stories started demanding to be put down on paper.

So armed with chocolate, hastily scribbled notes and a New Year's resolution to finally finish a book I discovered my motley crew at the Agency for Supernatural Law Enforcement and Exposure Prevention.

I now spend my days juggling work, children and writing - all while dreaming of chocolate (New Year's resolution) - and hoping one day to turn what has always been a truly enjoyable past-time into a wonderful career.”

Philippe Girard is a revered agent with the Agency for Supernatural Law Enforcement and Exposure Prevention. He is a werewolf and cranky to be pulled from his first vacation in two years to accompany a rookie agent, Max Striga, on her first assignment to arrest an enchantment making witch. There wasn’t supposed to be a death involved. Things get off to a rocky start when Max, also a witch, fails to detect a hidden dark spell which causes an explosion that blows up a file cabinet, the crime scene, and Agent Philippe. Philippe wasn't injured beyond his werewolf healing abilities, but that fact did not improve his mood. Max is a competent witch but Philippe feels she may not be cut out for field work. She is also insecure and has a snarky side when she gets backed into a corner. Philippe’s boss insists Max stay on the case to assist him in unraveling the reason for the mysterious death and who the miscreant is.

The plot is enthralling and complicated with several twists. Ms. Adams does a great job keeping track of all the threads and weaving them together for a cohesive story. The characters are well developed and the dialogue is engaging.

Here is a funny excerpt where we get to see some humorous dialogue. Philippe has entered the victim’s house to make sure it is clear before Max enters. Max is standing outside on the sidewalk when an elderly neighbor, who’s out for a walk, strikes up a conversation with her. Unaware Philippe is now standing behind her. The elderly neighbor asks:

“No offence to the lass, but how’s this tiny girl your boss? You’re late twenties, and a strapping capable looking lad. Why you settling for being an underling? Even to a pretty girl.”

“I’ve always enjoyed being under a pretty girl.”

Max gaped, her hand flying to her mouth as the flames in her cheeks soared higher…

The plot moves quickly, although they seem to be spinning their wheels by just missing their quarry. While Max is trying to prove herself she takes some stupid risks without Philippe’s permission. She has a lot to learn and she deserves Philippe’s quick temper outbursts. However, he is learning to appreciate her spunk. I would love to see something romantic develop between them. The sexual tension is certainly there.

I have some real concerns with the editing or proofing of the copy I was given to read. Besides the typical missing or wrong words used there were problems with the spelling of Philippe’s name. I came across several Phillipe and even a Phillip. A good editor should have caught this problem and getting the main character’s name wrong is not something I tolerate. So, I have to deduct a star.

I would strongly recommend a whole re-editing of Enchanting Death because the story is good enough to put forth the effort. Urban Fantasy is one of my favorite genres and I did enjoy this unique book. The ending wraps up nicely, but another storyline brings into question that it may be related more directly to the main plot. Further investigation needs to be done on the case. It’s a nice hook for book two. I can’t wait to see Philippe and Max work together now that he knows exactly who Max is.

Too many for reading comfort described in the body of my review.