Review: The Flight of the Pickerings by John Grayson Heide 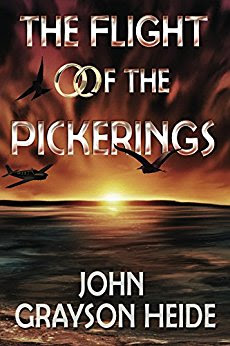 "Guy Pickering is a good man and good husband to his wife Dorothy who grows wackier every day with dementia. Guy sees the end coming and wants to be in control, but Life has other plans. His most private moments spiral out of control as a nosy neighbor intrudes, a rebellious teenage grandson shows up and finally a fame-hungry reporter spotlights them in front of a world-wide audience."

"The Flight of the Pickerings is based on a dream which came at a time of extreme stress in John's life. He was living in paradise (Hawaii) and watching his life savings evaporate. Negativity abounded, but the dream/story would not let go and John felt the increasing need to write it out. In writing, his life re-focused on bigger and better aspects and helped him move on. The story had a life of its own and after 8 years of steady re-writing, he’s finally happy to share it. Some people will appreciate the book and the underlying message of life and its sacredness. Also death, and its own brand of sacredness. Some people might take the story as an endorsement for suicide. This is not the intention of the book. The highest good this book might foster would be a brave and intelligent discussion among families regarding end of life issues."

Guy is the main character, a devoted, caring husband to Dorothy who is both senile and terminally ill. Guy will do anything to make her life, and death, easier. He had been a courageous soldier in his younger days, in both Korea and Vietnam, earning himself a Purple Heart; he needs this courage now. He is a very lovable character, as is Dorothy and the reader becomes deeply involved in their problems.

The narrative is well paced and the characters are believable, including the teenage grandson who swings between being mature and thoughtful, and uncaring and hostile, in the space of a minute. The dialogue is realistic and carries the story forward.

There is a lot of humour in this story, with a fussy daughter, Darlene, and a very nosy neighbour across the street. These characters, and the sulky grandson too,  lighten the sadness of the Pickerings in a natural, unforced way.

A strange thing about this book is the way the author assigns thoughts and feelings to the family cat and also to the cars that Guy drives, as in:

"The modest Ford Fairlane sedan that had sat for years in the shadow of the big beautiful Olds, cringed once again in self-loathing beside the blustering growl of the mighty classic."

And, when the car realises what Guy is up to:

It's a strange quirk which adds nothing to the story, only popping up now and again.

Some of the prose is overblown and a bit purple:

" . . . his voice enveloping her body with a soothing balm."

"A sense of honorable dignity joined a hint of relief and breathed its wonderful scent over Guy."

Overall, this is a lovely story, well worth reading - and thinking about. It covers a difficult topic with humour and compassion. The ending is perfect - and very exciting.

There was one common, grammatical error:

" . . . grandson—the same one that moments before had inferred that his grandparents ought to just go off and die."